"When mercy serves justice." Oratorians meditate on the Bible 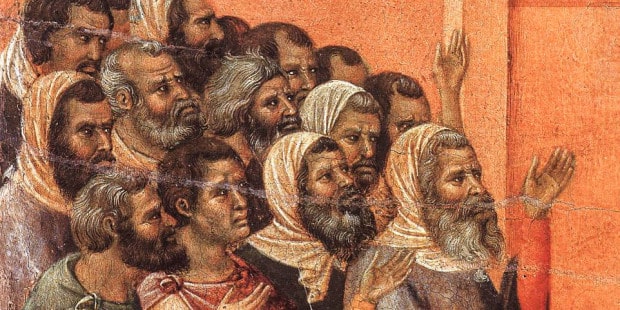 09 Apr "When mercy serves justice." Oratorians meditate on the Bible

At that time, Jesus went to the Mount of Olives. At dawn, he returned to the Temple. When all the people came to him, he sat down and began to teach. The scribes and Pharisees brought to him a woman who had been caught committing adultery. They put her in the midst and said to Jesus: "Teacher, this woman was caught in the act of adultery. Now in the Law, Moses commanded us to stone those women. And what do you say? "They spoke these things to test him, that they might accuse him. But Jesus stooped down and wrote on the ground with his finger. And when they persisted in questioning him, he stood up and said to them: "He who is without sin among you, let him be the first to cast a stone at her. " And he stooped down again and wrote on the ground. And when they heard this, they went away one by one, beginning with the older ones. Jesus remained alone with the woman still there in the middle. He got up and asked her, "Woman, where are they? Has no one condemned you? "She answered, "No one, Lord. "And Jesus said to her, "Neither do I condemn you. Go, and from now on sin no more. »

This scene tells us how the scribes and Pharisees set a trap for Jesus about his relationship to the Law of Moses: either he respects it and denies the merciful attitude towards others. Or Jesus remains merciful to others, but then he violates the Law of Moses about adultery. Jesus answers in two parts. He begins by writing on the ground, perhaps in reference to Jeremiah 17:13: "...and the Lord said to him, 'I will be merciful to you, and you shall be forgiven. Lord, hope Israel, all those who forsake you will be confounded, those who turn away from you will be written in the earth, for they have forsaken you, the fountain of living waters! ». In the second, he takes the Pharisees at face value by referring to a precept of the law, also in Deuteronomy 13:10-11. According to this text, in case of stoning, it is the witness of the crime against the Torah who has the right to cast the first stone.

Whatever Jesus wrote on the ground, Jeremiah's verse has the advantage of targeting different relationships to Scripture, here in its juridical dimension. Where the scribes and Pharisees used Scripture to better trap Jesus and condemn the woman, Jesus refers to Scripture as a spring of living waters, as a way to freedom. The former use Scripture to seek to lose the human being, in this case the woman and Jesus, rather than to serve his relationship with God. Jesus is accused for his attitude of mercy and the woman is subjected to the deadly role that her accusers make the law of Moses play: she crushes and exercises murderous violence.

Faced with the perversity of such a relationship to Scripture, with a enslaving reading of the law of Moses which favours the hold on others, Jesus frees himself from the trap set for him. By reinterpreting the prescription of Deut 13, he places his interlocutors, the Pharisees and the scribes, before their own condition as sinners: only those who are without sin have the right to be stoned. Binding the act to the word, Jesus gives the woman back her freedom. Jesus' gesture, therefore, consists in restoring the meaning of the Law, as indicated in Exodus 20:2-4, in the way Scripture presents the lawgiver: "... the lawgiver is the lawgiver, and the lawgiver is the lawgiver. I am the Lord your God, who brought you out of the land of Egypt, out of the house of bondage. You shall have no other gods before me. You shall make no idols or images of anything that is in heaven above, or on the earth beneath, or in the waters under the earth.. "How could a liberator condone an enslaving use of the law? That is why Jesus unmasks the perverse use of Scripture that he unmasks. Let him who demands a rigorous, even rigid, application of the Law apply it to himself! The following scene shows the correctness of this reasoning: the departure of the accusers is the sign of their defeat. Each one discovers himself, like the woman they had brought with them, in a situation of sin. In doing so, each one recognized himself as a transgressor, therefore, under the judgment of God and not in a position to exploit it according to his own interests. No one is in a position to judge others. The accuser joins the accused. Having fallen into the ranks of sinners, he is no longer in a position to use God's will to enslave.

On the other hand, by his merciful attitude, recognizable by his words and deeds, Jesus makes known to those who approach him, or whose approach he makes, the mystery of the mercy which makes him live and from which he radiates. This practice of mercy restores the victims of enslaving practices to their dignity and freedom, thus opening a path to peace. By embodying a practice of mercy that restores each person to his or her rightful place, he or she attests to an understanding of mercy that is not opposed to justice. On the contrary, in him, there is "...no one who is not merciful...". no peace without justice and no justice without forgiveness ».

François Picartpriest of the Oratory