Discovery of the church

The architecture of Saint-Eustache has been the object of the most contradictory judgements: some reveal a passionate admiration, others the most extreme severity. The verdict of Viollet-de-Duc is without appeal; the famous architect considers Saint-Eustache to be "a confused pile of debris borrowed from all sides, unconnected and disharmonious, a kind of Gothic skeleton covered with Roman rags sewn together like pieces of harlequin clothing". By its plan and structure, Saint-Eustache is the daughter of Notre-Dame de Paris: nave flanked by double aisles and chapels, wide transept not protruding outside, choir surrounded by a double ambulatory and a row of chapels. But the interior decoration is typical of the Renaissance: classical and modern at the same time, as Saint-Eustache appears to us, in its architecture, in its decoration, in its parish life. 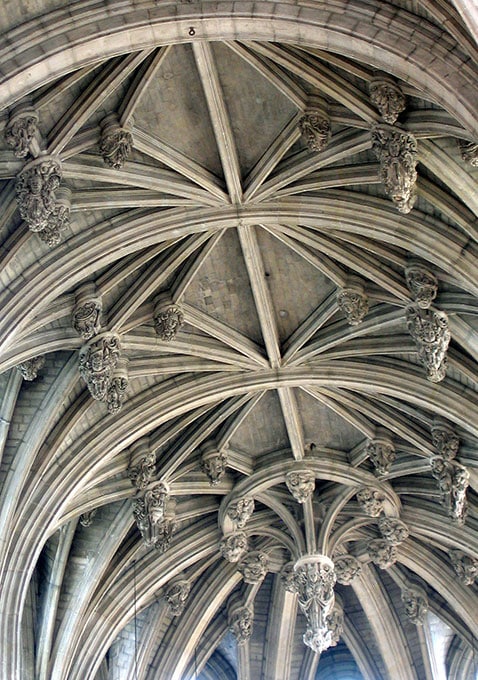 The dimensions of the church are imposing Inside the building the length is 100 meters, the width 43 meters, the height 33 meters. The grandiose proportions, the height of the vaults, the perfect harmony of vertical lines and elegant curves, the depth of the perspectives are striking from the moment you enter.

In the nave, at the height of the fourth bay, we find the workbench, executed around 1720 by Pierre Lepautreon Cartaud's drawings. This large piece of woodwork consists of a Greek portico supported by four fluted columns, with the statue of Saint Agnes accompanied by three angels. Opposite is the chair designed by Victor Baltard.

At the crossing of the transept, one can admire the choir, with its stalls that were installed after the Revolution, the high altar designed by Victor Baltardthe big canopies of Soulignac.

Around the church,
starting from the Chapel of the Virgin Mary

The central chapelThe "Blessed Sacrament", which stands out strongly at the church head, is much more developed than the others. It once had two storeys of windows: in the eighteenth century, the lower windows were condemned to the construction of the Moreau building to the south. Primitively, the chapel of the Holy Virgin was decorated with a rich ornamentation of marble, woodwork and paintings, which disappeared during the Revolution. Restored in 1802, it is enriched with a very beautiful marble statue of the Virgin, sculpted by Pigalle for the Chapel of the Invalides.

On 28 December 1804, the Chapel of the Virgin was solemnly inaugurated by Pope Pius VII, who had come to Paris for the coronation of Napoleon. The attitude of the Virgin is admirable, slightly inclined on the right side, in a graceful movement, she reaches out her hands to the Child, sitting on the folds of her cloak and raising her right hand in a gesture of blessing. It is to the painter Thomas Couture, Manet's master, who is entrusted with the execution of the frescoes. of the chapel: they represent the power of intercession of the Virgin.

In the chapel on the right, there is a staircase with a Louis XVI balustrade leading to a door with a pediment, through which one can access the present Saint Agnes Chapel which is used for weekly masses in winter, and in the catechism hall.

After the entrance door called "de la Pointe", we find the butchers' chapel among the traditions of Saint-Eustache, certain corporations of Les Halles had their religious centre. A company of butchers "Le Souvenir" has returned to the past by adopting the Saint-André chapel that it has embellished with a stained-glass window, then a contemporary work of art by John Armleder. A solemn Mass is celebrated every year in the name of the Confédération nationale des Charcutiers Traiteurs de France (National Confederation of French Butchers and Caterers). 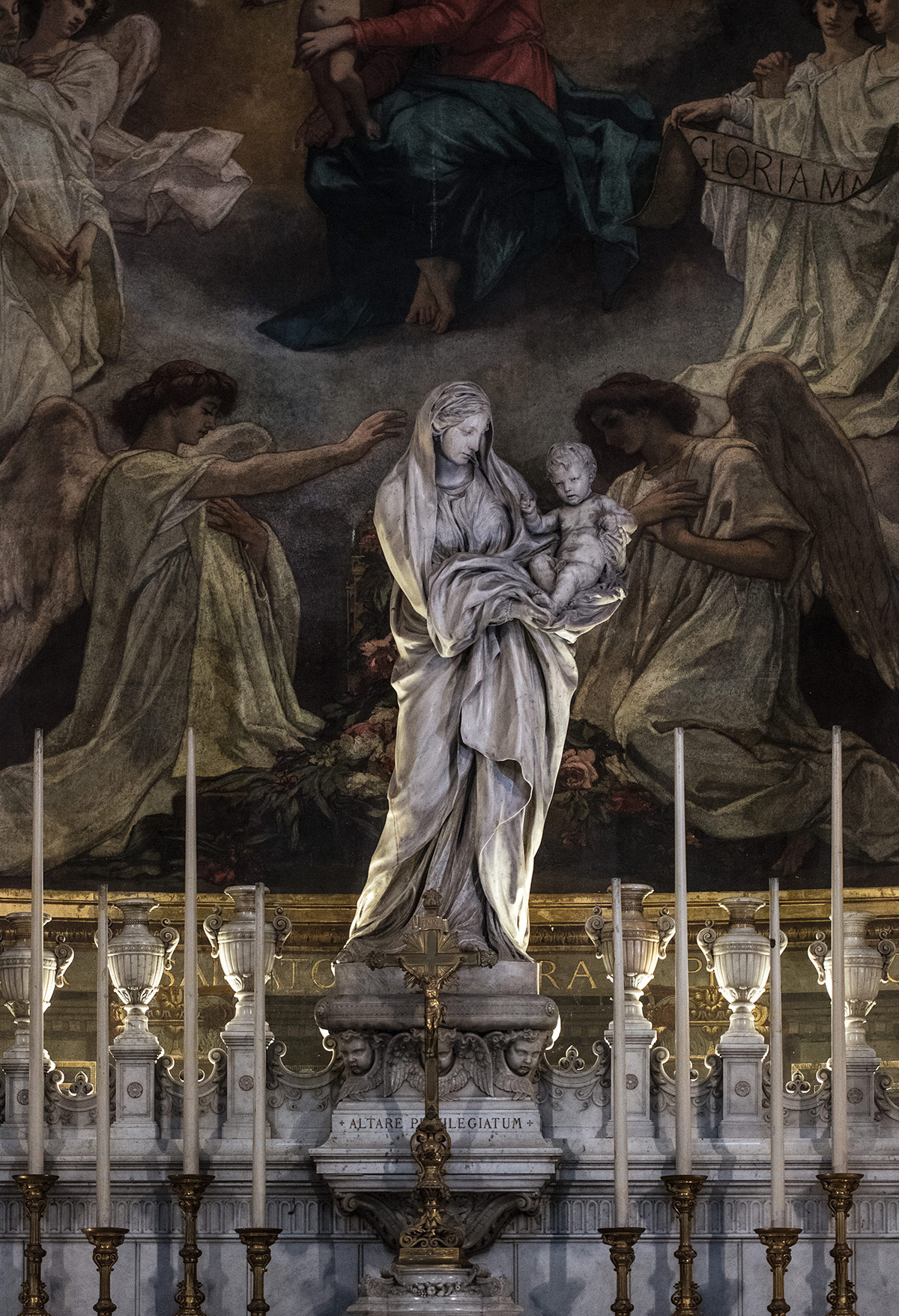 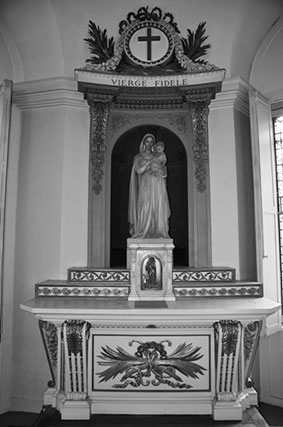 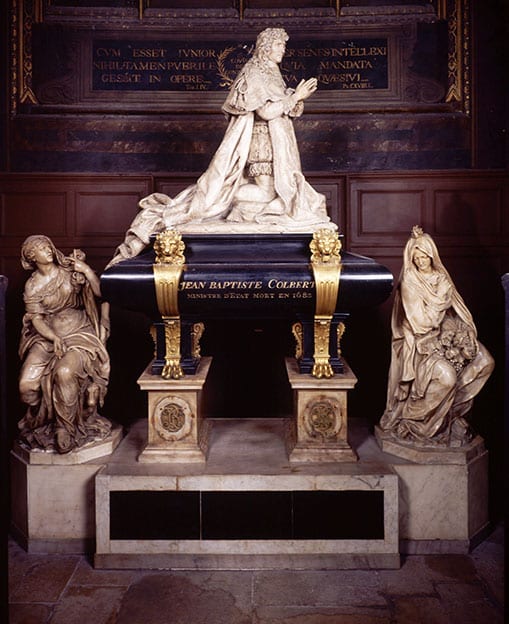 To the left of the Chapel of the Virgin Marywe find a masterpiece: the Colbert's Mausoleum, by Coysevox. The minister is represented here dressed in the costume of the Order of the Holy Spirit, with his sword on his left side, in the attitude of prayer: the joined hands, long and slender, are admirable, the face is of serene gravity. On each side of the monument, a statue of a seated woman: on the left, Fidelity; on the right, Abundance. 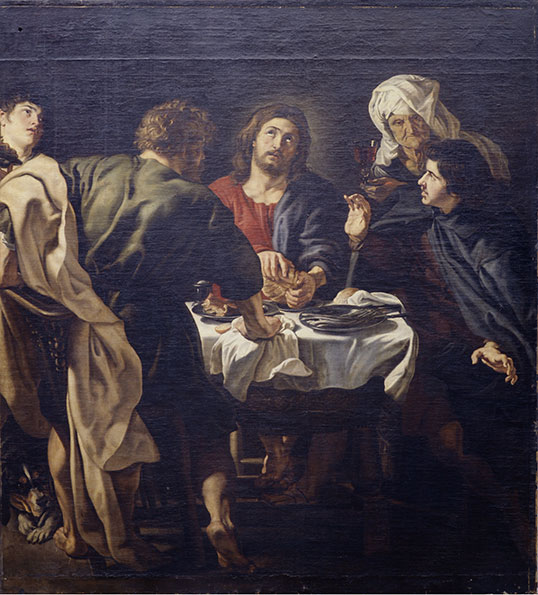 It is in the following chapel that we can admire the most beautiful painting of Saint-Eustache : "The Disciples of Emmaus" by Rubens or his school. Everything in this painting bears witness to a rare mastery: the physiognomy of Christ, the gripping expression of the disciples, the head of the old maid on the right, the shortening of the hands, the astonishing still life of the table. 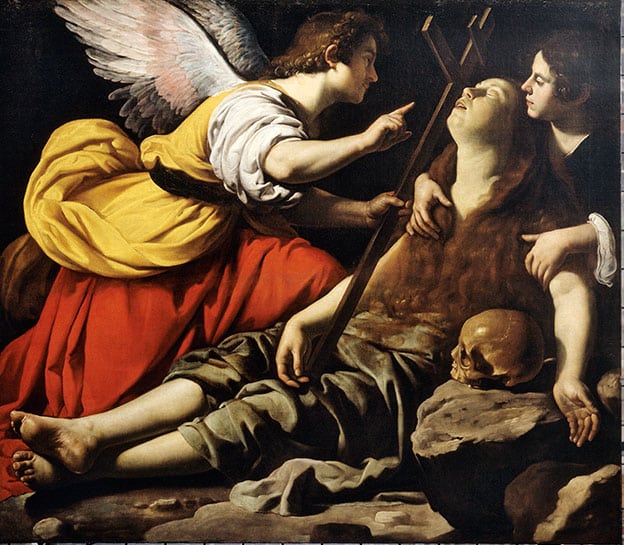 The Sainte-Madeleine Chapel a "Ecstasy of the Magdalene" by Rutilio Manetti... (1571 – 1636). The subject of this painting is not the death of the saint, but her mystical relationship with God. St. Magdalene is lying half stretched out, supported by an angel, while another angel leans over her and brings her a message from on high. 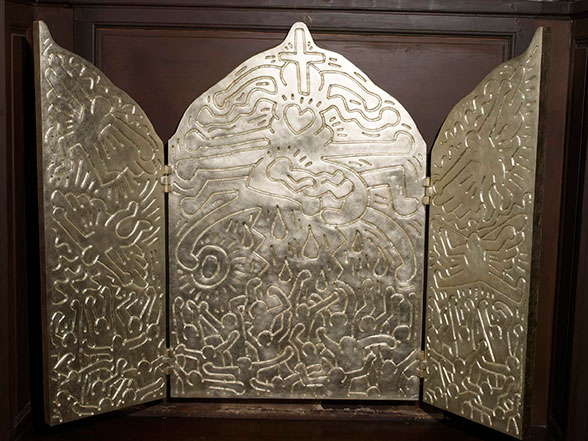 In 1803 was given to the chapel following the name of Saint-Vincent de Paul who resided, as an inscription reminds us, in the territory of the parish from 1613 to 1623, when he was tutor to the de Gondi family. The City of Paris has deposited here a contemporary work of art by Keith Haring, "The Life of Christ.". You will find explanations about the triptych on the spot. 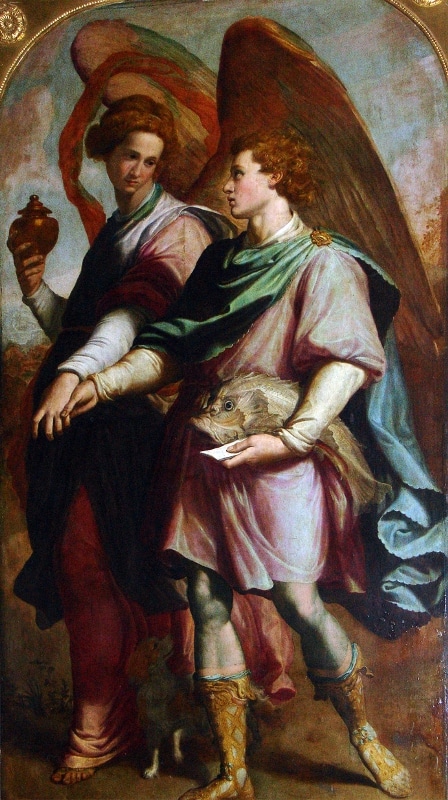 Further on, we find a table of Santi di Tito (Borgo San Sepolcro 1536-1603), "The Angel leading Tobias". The next chapel was dedicated in 1805 to Saint Louis, with an eighteenth-century painting above the altar, with Saint Louis in adoration before the crown of thorns.

Above the door leading to the Hall of Columns (not open to the public) was a tribune for the Duchess of Orleans, mother of Louis-Philippe. Near the pillar of the entrance door, a monumental plaster stoup by Eugène Bion (1834): Pope Alexander II instituted the use of holy water.

Further on, the baptismal font chapelwith the arms of Jean de Nicolay, Lord of Goussainville, contains the a copy of a painting by Rubens: "The Adoration of the Magi.". 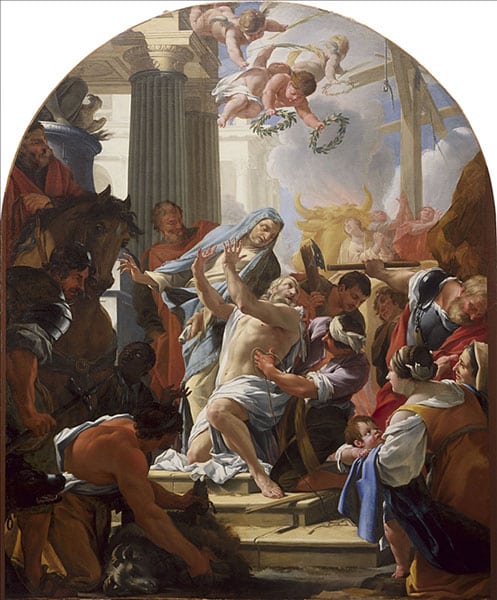 Above the door, at the bottom of the north side, under a painting by Ménageot (1744-1816): "The Adoration of the Shepherds", one will not fail to admire the large painting of Simon Vouet: "The Martyrdom of Saint Eustace“. This work had been commissioned from the artist by Richelieu, for the high altar of Saint-Eustache; it was completed, in its upper part, by the "Apotheosis of the Holy Martyr". The whole was removed from the church, the two parts separated. The upper part was sent to the Museum of Nantes, where it still stands, the other part entered the famous collection of Cardinal Fesch, then belonged to a Mr Moret who, in 1855, gave it to the City of Paris to give it to the church.